The Aerial Splendor of Moloka’i

When I envision Hawai’i, I conjure up images of crinkled green mountains, dark lava rock, and layers of blue ocean, all in vibrant color. In the few years that I have called these islands home, I have seen their splendor from the surface of the water and the top of a volcano. I never knew that a more breathtaking view was possible until I took to the sky to see the sea cliffs of Moloka’i on a Mokulele Air Tour. Living on Maui, I have learned that it is a good day when the Big Island can be seen. As I drove from the Central Valley toward Kapalua, I strained my eyes against the cloudless sky to look toward the southern part of the island. Yes. In the distance was the barely visible silhouette of Mauna Kea. It was going to be a beautiful day for flying.

The Kapalua Airport is a humble little airport. With the friendliness that only comes in small places like these, the staff greeted me, gave me a shell lei and water, and told me to wait at Gate 4. It was not difficult to find, and I quickly made conversation with my fellow passengers as we shared our anticipation. Soon our eager party of five was escorted to the Cessna 208B Caravan where Eddie and Nick, who would be our Captain and Pilot, greeted us. Though professional, they also made us feel at ease, like we were already friends. We got our safety briefing and boarded the cozy little plane with its nine passenger seats, ready to takeoff on our adventure. I put on my noise-cancelling headphones, let the sound of local music set the tone, and watched while Moloka’i came into view across the Pailolo Channel. Already, I was falling in love with the little plane. I am a fairly well seasoned traveler, and this was truly unlike any flying experience that I have had. We meandered around the Friendly Isle from Elephant Rock, along steep waterfall-streaked sea cliffs and valleys, over the former leper colony of Kalaupapa, and past the town of Kaunakakai, watching it give way to a seemingly endless fringing reef. It was the Hawai’i that I have always imagined, with layers of greens and grays and blues that came to life while Eddie spoke of the history of this place. As Moloka’i faded into the distance and Lana’i was a passing glance, Maui grew closer again. Soon the weightlessness of flight gave way to the momentary feeling of the plane’s wheels touching down on the runway. In a world that is so full of distractions, I had been completely immersed in the experience, unaware of anything except for each passing moment.

There is nothing like dipping and gliding through the air, somehow simultaneously both a part of the landscape and an observer. I did not want it to end, but the vibrant images and feelings linger on. To say that no photo could do it justice would be the absolute truth. 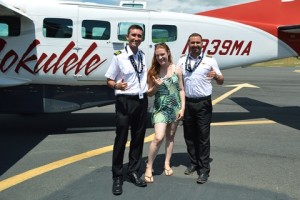 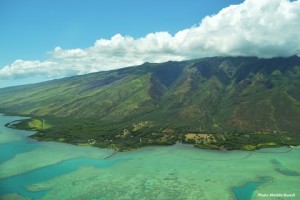